You are here: Home > Chocolate Sex 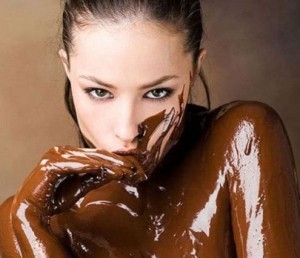 The log fire is raging and the lights are turned down low. He snuggles in and his mind turns to passionate ways of getting the pulse racing on a cold winter’s night.

However, her mind is firmly stuck on far sweeter things – her favourite chocolate treat hidden away in the cupboard.  A survey has confirmed what many chaps had always feared: That most women would rather give up sex than chocolate.
How many time have you bitten into a piece of chocolate and found yourself moaning from the sheer pleasure of it? How often have you joked about why chocolate is as good as — or better than — sex? Believe it or not, there is a scientific link between chocolate and sexual arousal. In 2004, researchers at a hospital in Milan, Italy, questioned nearly two hundred women about their consumption of chocolate and their feelings of sexual fulfillment.

The results are impressive. Women who consumed chocolate daily reported a higher degree of sexual satisfaction. The study, which was funded by a university for academic purposes, and not by a chocolate company, indicated that even women who normally had a lower libido reported an increase in their sex drive after consuming chocolate.
From a scientific standpoint, chocolate contains both Serotonin and Phenylethylamine, which are mood-lifting hormones found naturally in the human brain. When we consume chocolate, we increase our normal levels of both, which leads to that feeling of excitement, as well as an increased level of energy. So although chocolate may or may not be a true aphrodisiac, it certainly does have some aphrodisiac properties. After all, it makes us feel good all over — much like being in love!

In some magical traditions, food and magic go hand in hand. It stands to reason, then, that a great way to bring someone closer to your heart is to give them a gift of chocolate!

Other Aphrodisiac foods:
Food, like sex, is a fully sensory experience, so it’s no mystery why certain foods are thought to have aphrodisiac properties. Since the beginning of time, humans have been using food to help “get in the mood” and make their love life a little more spicy!

Aphrodisiac foods usually fall into one of two categories: visual representation or biochemical activators. Foods that look like human genitalia are often thought to act as a simple reminder of the fun to come and thereby put people in the mood. Other foods may have nutrients that stimulate the body or mind through biochemical pathways, increasing blood flow or hormone action. Below is a quick list of the most popular foods thought to have aphrodisiac properties.
Visual Representatives

Oysters – Oysters are said to resemble female genitalia and have long been used to represent sex. Not only are oysters visually stimulating, but they also contain a high amount of zinc, which is said to stimulate testosterone production.

Asparagus – Asparagus are a clear phallic symbol and the simple act of eating it is said to stimulate lust. This theory about asparagus flies back hundreds of years and they were even included in traditional pre-wedding meals in France. Today, scientists know that asparagus are high in potassium and other nutrients that may heighten stimulation.

Figs – Figs are soft, sweet, and are said to resemble female sex organs. Even the ancient Greeks associated this highly prized fruit with love and fertility.

Bananas – Bananas are another popular phallic symbol, in both ancient times and modern pop culture. Not only do bananas resemble male genitalia, but they contain a mix of potassium and other nutrients that may help boost libido.
Biochemical Stimulants

Hot Peppers – Capsaicin, the spicy compound found in hot peppers, can dilate blood vessels and get the blood pumping, both of which are needed for arousal. Spicy foods are often thought of as exciting, which furthers its connection to sexual arousal.

Chocolate – Chocolate is often joked about as being “better than sex” because of its biochemical effects on the brain. Chocolate contains compounds that cause a release of dopamine, or pleasure hormones, in the brain, which is similar to the release of hormones during sex. Chocolate is one of the most popular aphrodisiac foods consumed on Valentine’s Day.

Truffles – The scent of truffles is very similar to human pheromones, which are chemicals that our body releases for the purpose of sexual attraction. Simply smelling truffles can put many people in the mood.

Red Wine – Not only is red wine good at lowering inhibitions, it also contains reservatol and other antioxidants that promote blood flow.

Vanilla – The scent of vanilla is said to have a calming and comforting effect on the brain, which can heighten amorous interactions.