You are here: Home > Anais Nin 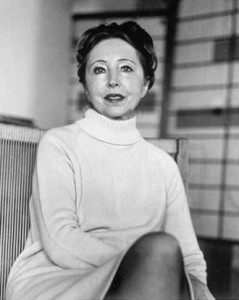 “Had I not created my whole world, I would  certainly have died in other people’s.”

Nin was a friend, and in some cases lover, of many leading literary figures, including Henry Miller, John Steinbeck, Antonin Artaud, Edmund Wilson, Gore Vidal, James Agee, James Leo Herlihy, and Lawrence Durrell. Her passionate love affair and friendship with Miller strongly influenced her both sexually and as an author. Nin wrote about her infatuation with the Surrealist artist Bridget Bate Tichenor in her diaries. Claims that Nin was bisexual were given added circulation by the Philip Kaufman film Henry & June about Henry Miller and his second wife June Miller. Nin’s first unexpurgated journal, Henry and June, makes it clear that Nin was stirred by June to the point of saying (paraphrasing), “I have become June,” though it is unclear whether she consummated her feelings for her sexually. To both Anaïs and Henry, June was a femme fatale—irresistible, cunning, erotic. Nin gave June money, jewelry, clothes, often leaving herself broke.

In her second unexpurgated journal, Incest, she wrote that she had an incestuous relationship with her father, which was graphically described . When Nin’s father learned of the title of her first book of fiction, House of Incest, he feared that the true nature of their relationship would be revealed, when, in fact, it was heavily veiled in Nin’s text.

About:
Anaïs Nin (Spanish: [anaˈis ˈnin]; born Angela Anaïs Juana Antolina Rosa Edelmira Nin y Culmell, February 21, 1903 – January 14, 1977) was an author born to Spanish-Cuban parents in France, where she was also raised. She spent some time in Spain and Cuba but lived most of her life in the United States where she became an established author. She published journals (which span more than 60 years, beginning when she was 11 years old and ending shortly before her death), novels, critical studies, essays, short stories, and erotica. A great deal of her work, including Delta of Venus and Little Birds, was published posthumously.

Personal Life:
According to her diaries, Vol.1, 1931–1934, Nin shared a bohemian lifestyle with Henry Miller during her time in Paris. Her husband Guiler is not mentioned anywhere in the published edition of the 1930s parts of her diary (Vol. 1–2) although the opening of Vol. 1 makes it clear that she is married, and the introduction suggests her husband refused to be included in the published diaries. Nin appeared in the Kenneth Anger film Inauguration of the Pleasure Dome (1954) as Astarte; in the Maya Deren film Ritual in Transfigured Time (1946); and in Bells of Atlantis (1952), a film directed by Guiler under the name “Ian Hugo” with a soundtrack of electronic music by Louis and Bebe Barron. The diaries edited by her second husband, after her death, tell that her union with Henry Miller was very passionate and physical, and that she believed that it was a pregnancy by him that she aborted in 1934.

In 1947, at the age of 44, she met former actor Rupert Pole in a Manhattan elevator on her way to a party. The two ended up dating and traveled to California together; Pole was sixteen years her junior. On March 17, 1955, she married him at Quartzsite, Arizona, returning with Pole to live in California. Guiler remained in New York City and was unaware of Nin’s second marriage until after her death in 1977, though biographer Deirdre Bair alleges that Guiler knew what was happening while Nin was in California, but consciously “chose not to know”.

Nin referred to her simultaneous marriages as her “bicoastal trapeze”.

In 1966, Nin had her marriage with Pole annulled, due to the legal issues arising from both Guiler and Pole having to claim her as a dependent on their federal tax returns. Though the marriage was annulled, Nin and Pole continued to live together as if they were married, up until her death in 1977.

After Guiler’s death in 1985, the unexpurgated versions of her journals were commissioned by Pole.  Pole died in July 2006.

Nin often cited authors Djuna Barnes and D. H. Lawrence as inspirations. She states in Volume One of her diaries that she drew inspiration from Marcel Proust, André Gide, Jean Cocteau, Paul Valéry, and Arthur Rimbaud.

Later life & legacy:
The explosion of the feminist movement in the 1960s gave feminist perspectives on Nin’s writings of the past twenty years, which made Nin a popular lecturer at various universities; contrarily, Nin disassociated herself from the political activism of the movement.

In 1973 Anaïs Nin received an honorary doctorate from the Philadelphia College of Art. She was elected to the United States National Institute of Arts and Letters in 1974. She died in Los Angeles, California on January 14, 1977 after a three-year battle with cancer. Her body was cremated, and her ashes were scattered over Santa Monica Bay in Mermaid Cove. Her first husband, Hugh Guiler, died in 1985, and his ashes were scattered in the cove as well. Rupert Pole was named Nin’s literary executor, and he arranged to have new unexpurgated editions of Nin’s books and diaries published between 1985 and his death in 2006.

Philip Kaufman directed the 1990 film Henry & June based on Nin’s novel Henry and June: From the Unexpurgated Diary of Anaïs Nin. She was portrayed in the film by Maria de Medeiros.